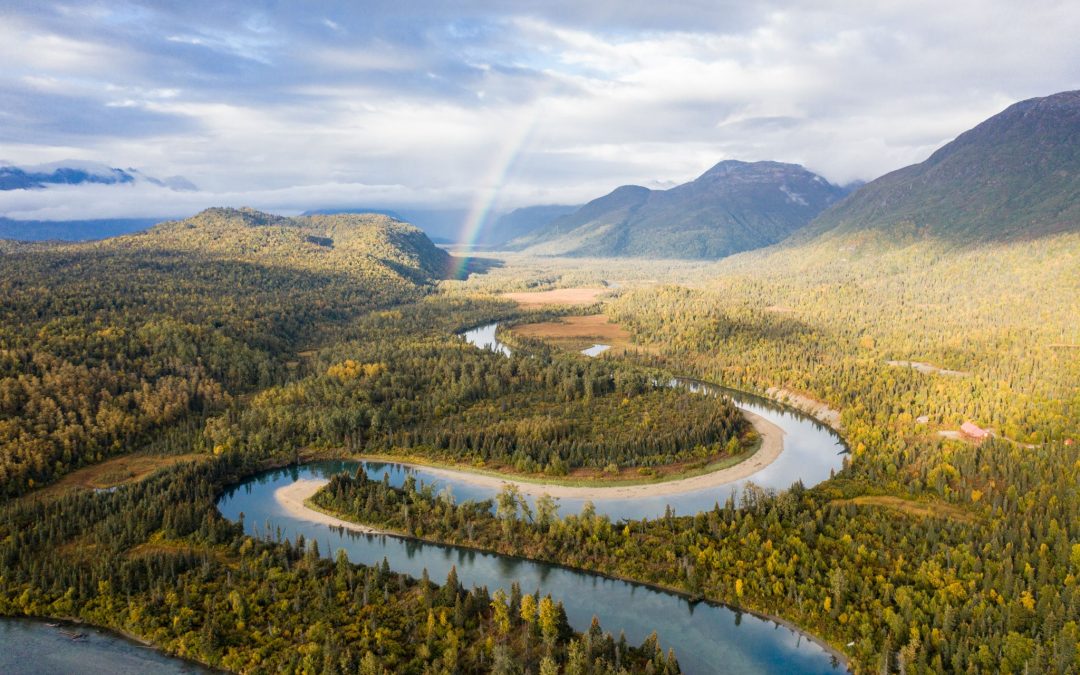 Fishing in Alaska is an unforgettable experience. From our wildlife to the breathtaking scenery, Western Alaska offers some of the best river fishing in the last frontier. Trout, Char, and various Salmon species make fishing in Alaska a unique and unforgettable experience. Read below to learn why fishing here is so incredible, what fish live here, and what seasons are best for fishing. 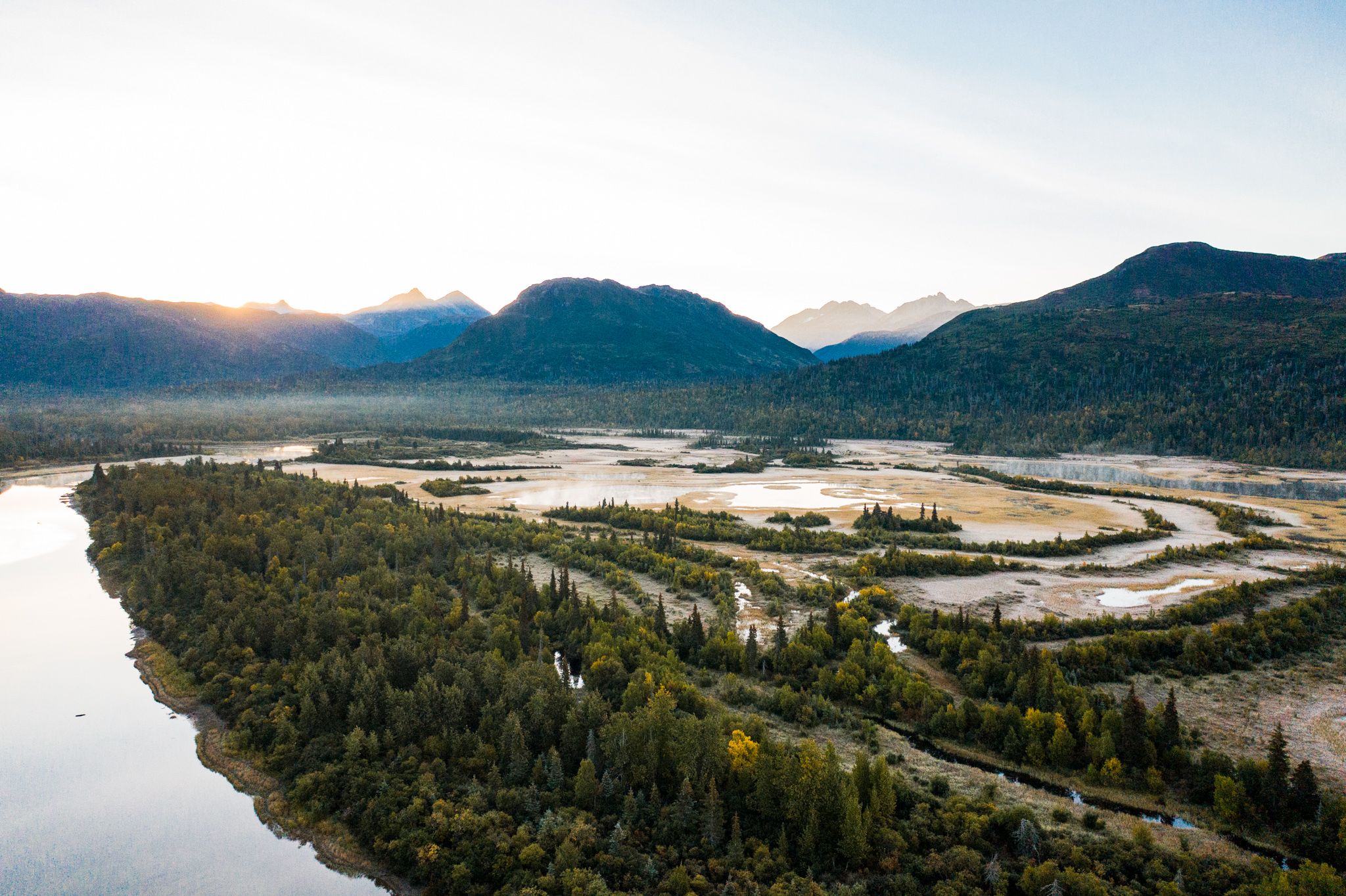 The remoteness of Alaskan rivers and the size of our fish make fly-fishing here an insane experience. Alaska has some of the largest river systems, and many of them are only accessible by bush plane or jet boat. We love sharing the vastness of western Alaska with tourists and Alaskans alike. 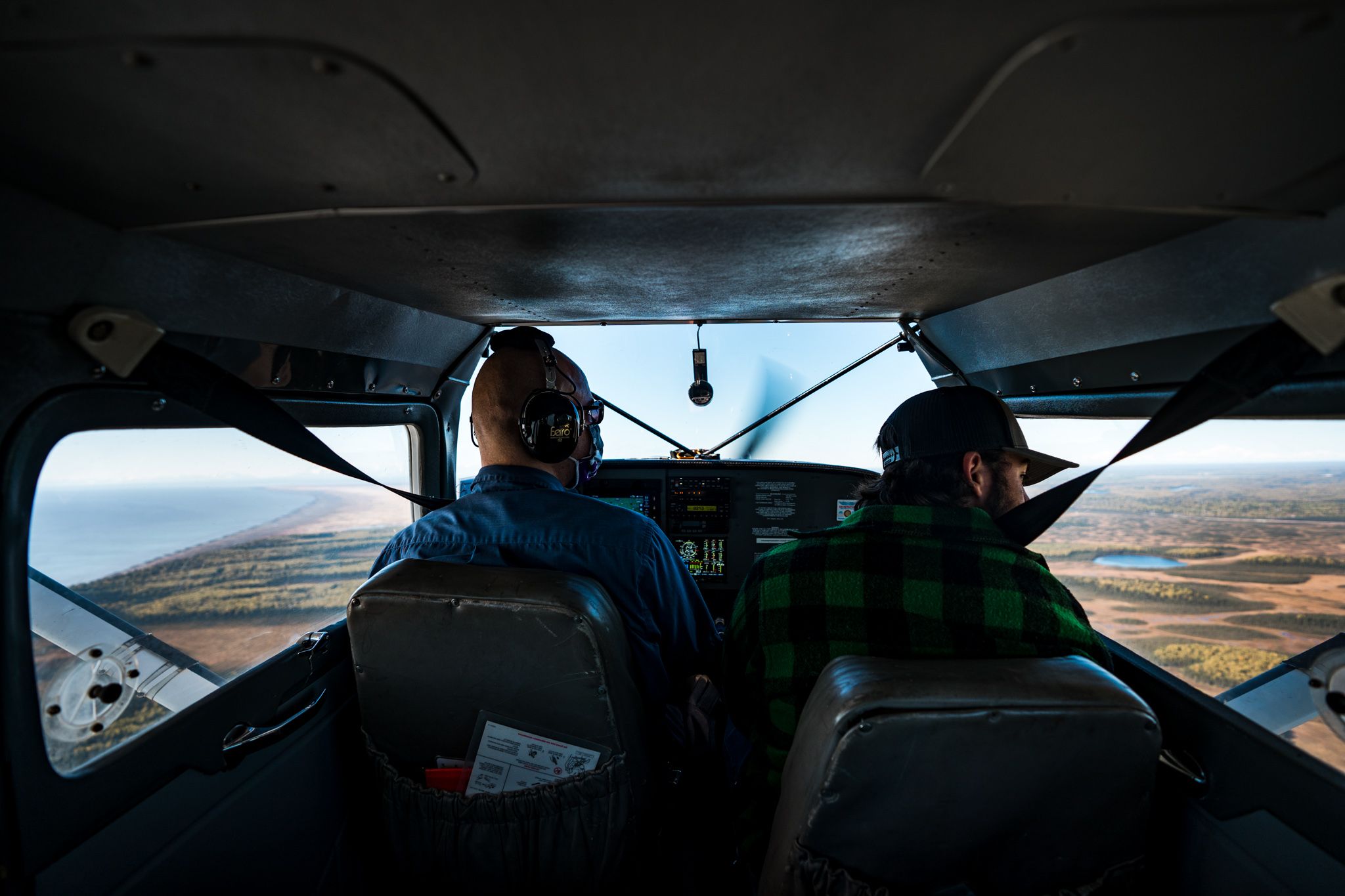 The only way to get here is via sky-travel

Salmon make Alaskan rivers unique because they feed trout and char, which causes them to grow huge. The trout and char eat salmon eggs and as the salmon spawn, their decay becomes an additional food source. For fishermen, trout and char fishing is spectacular and simple with a bead (an egg imitation) or flesh flies. Alaskan rivers also offer insects, plankton, and other small food items that fish feed on. 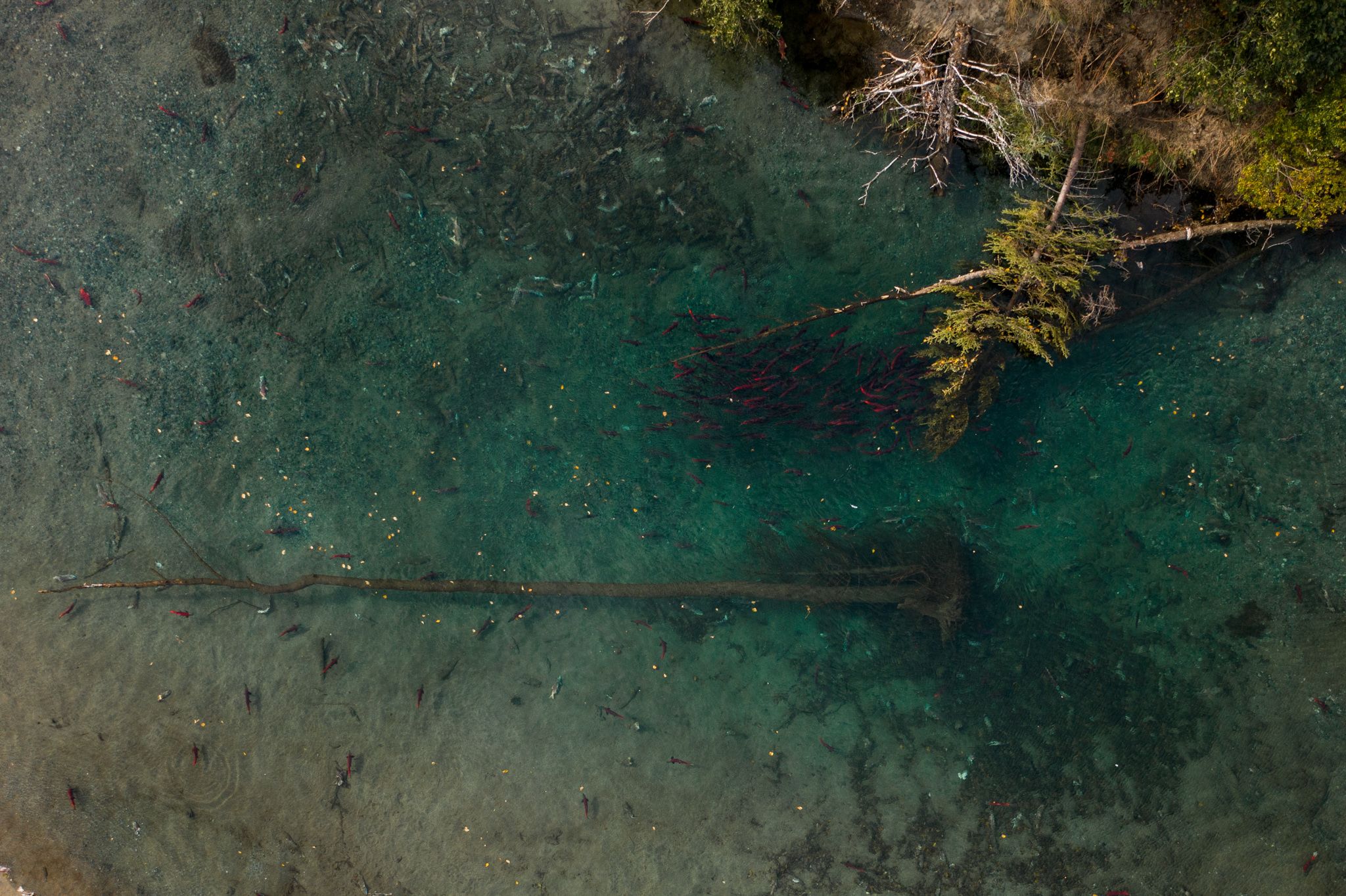 We love our river views of mountains, bears, and eagles. Stepping outside in Alaska often feels like being fully immersed in nature in its purest state. Just imagine casting a streamer out into a vast river and feeling the tug of a massive rainbow while an eagle swoops overhead. That’s what we love about Alaska. 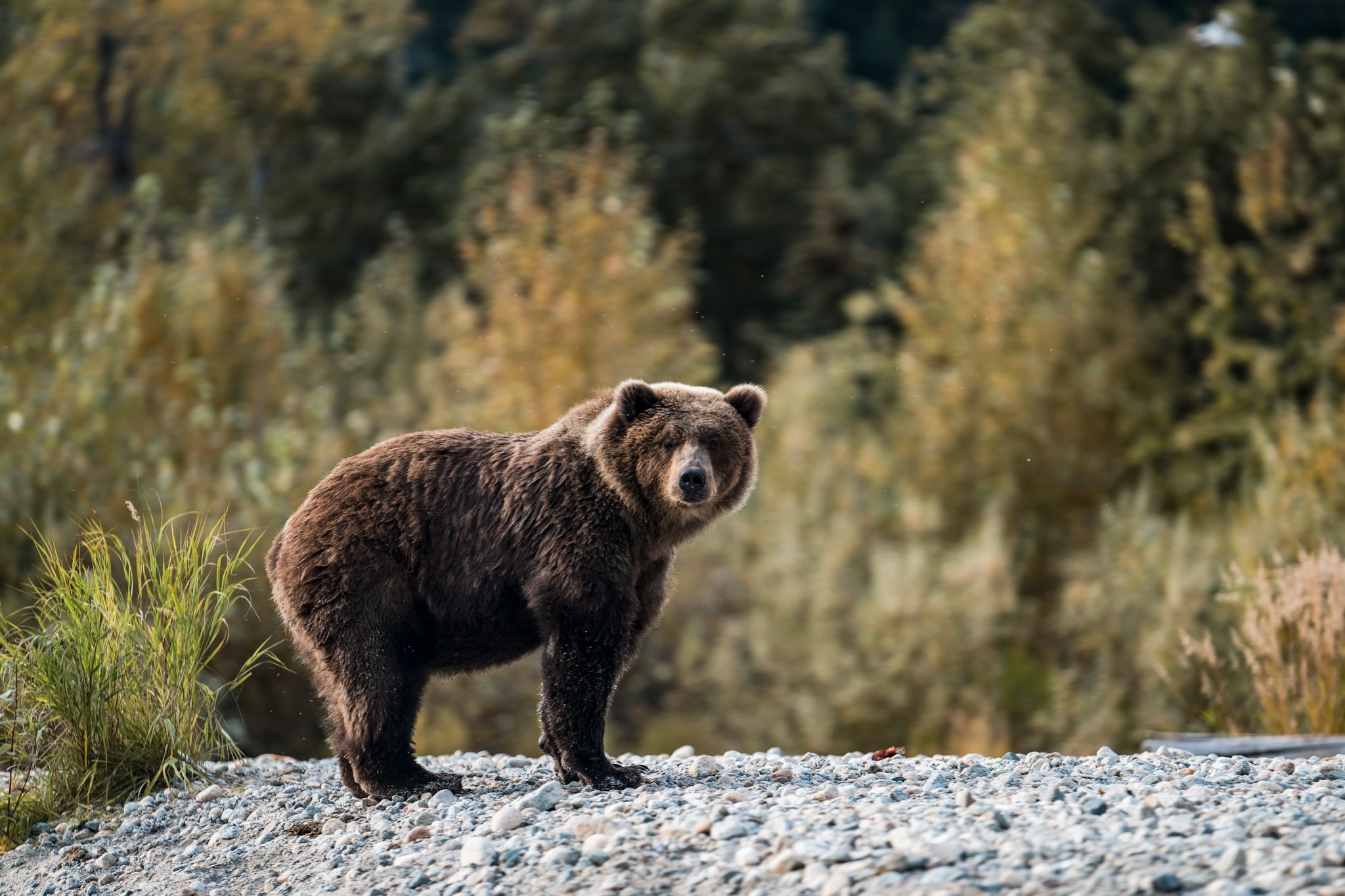 What Fish Can be Found in Alaskan Rivers

The variety of fish species that Alaskan rivers offer is incredible. We have trout, char, grayling, and salmon. All of these fish are a blast to fish for and they keep us busy all summer and fall.

Alaskan rainbow trout, especially in the western part of the last frontier can be huge. The quantity and quality of our rainbow trout are unbeatable. They put up an energetic fight and are known for aggressive head shakes. Rainbow trout in Alaska have been caught over thirty inches, and some of them have similar sized girths! You will not be disappointed by the massive trout in Alaskan rivers, especially if you come during the fall. 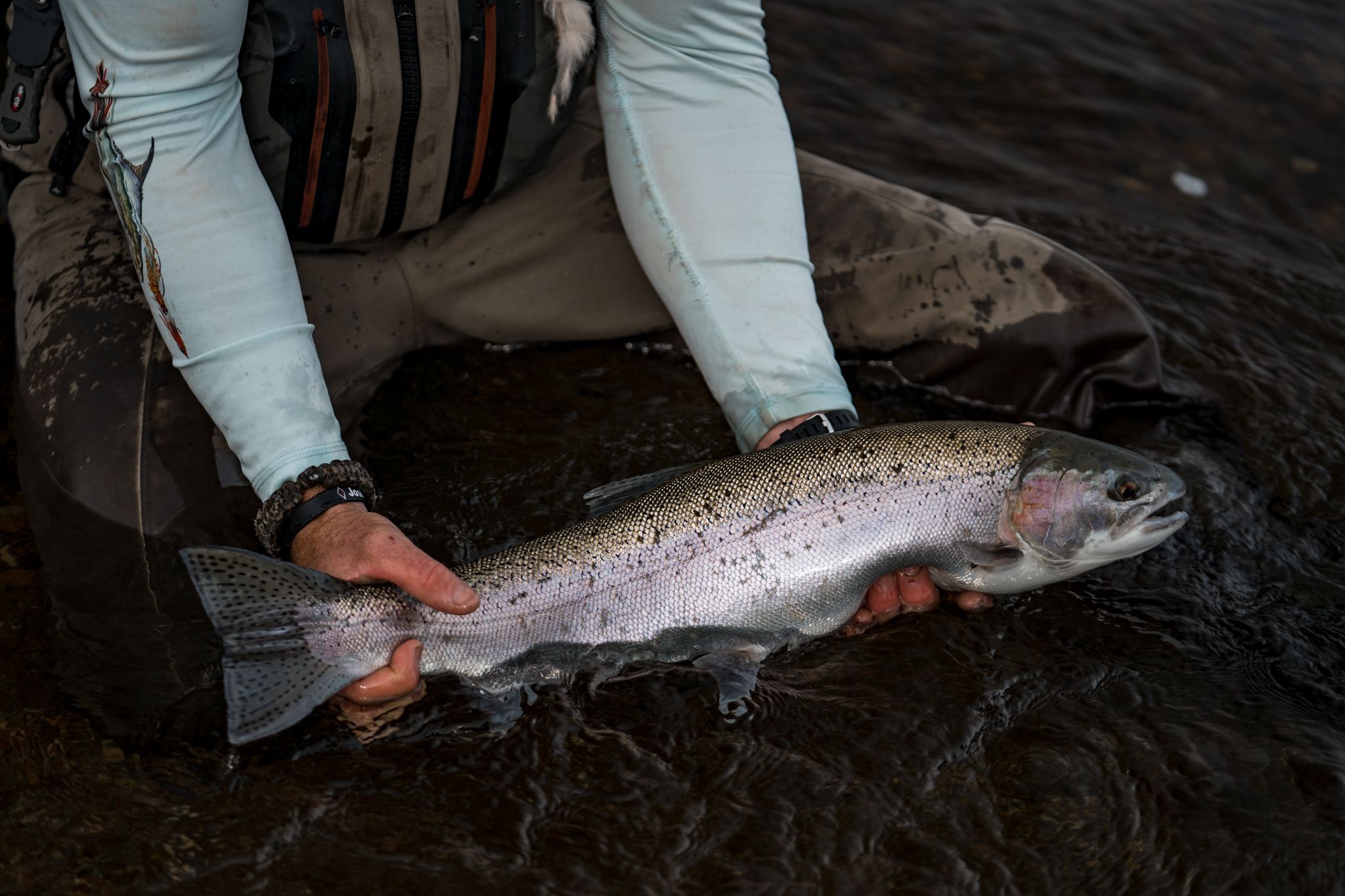 The most abundant freshwater fish in Alaska is the arctic grayling. They enjoy the cold and clear streams of northern and western Alaska. Although a smaller species, these beautiful fish can grow to be quite nice in our rivers. One of the most popular techniques for Grayling fishing is with a dry fly, and the topwater bite is so fun! Grayling are known for their sail-like dorsal fin and silver, grey, blue, and black colors. They are sometimes called the “sailfish of the North”.

Dolly Varden and Arctic Char are often mistaken for one another because of their similar appearances. Char are distinguishable by their larger spots and vibrant spawning colors of orange and yellow. Dollys are known to have smaller spots, slightly forked tails, and larger kypes (in spawning males). These unique salmonoids can grow to be over thirty inches. These fish focus their efforts on feeding on the salmon and trout spawn, and will give you the fight of a lifetime once hooked. 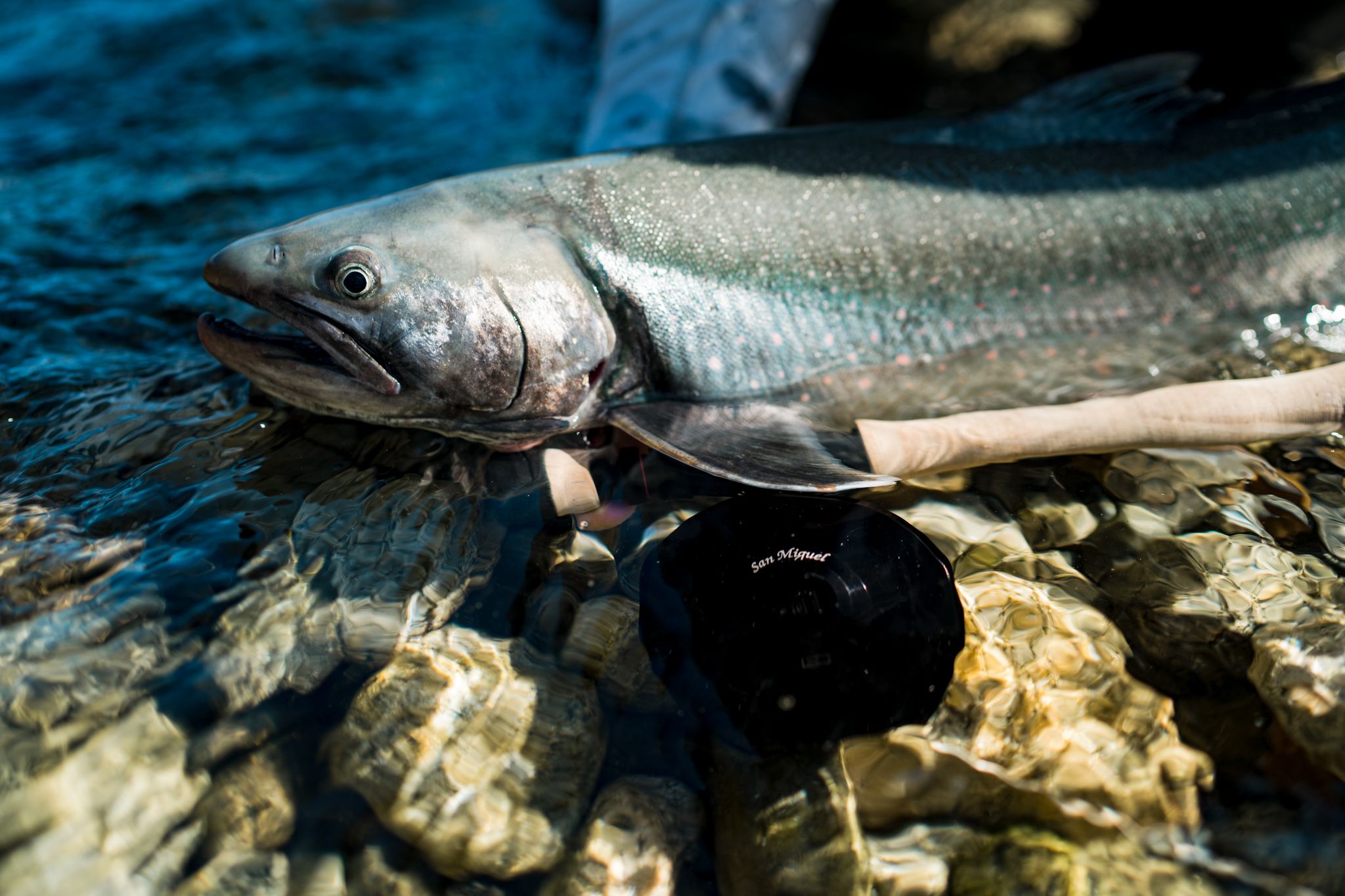 Also known as the king salmon, chinooks are humongous. It is common for a king salmon to weigh over thirty pounds! Our rivers in western Alaska go crazy when the chinook are running. They put up huge fights and are truly incredible fish. Catching an Alaskan chinook salmon is an unforgettable experience that we love sharing with visitors! 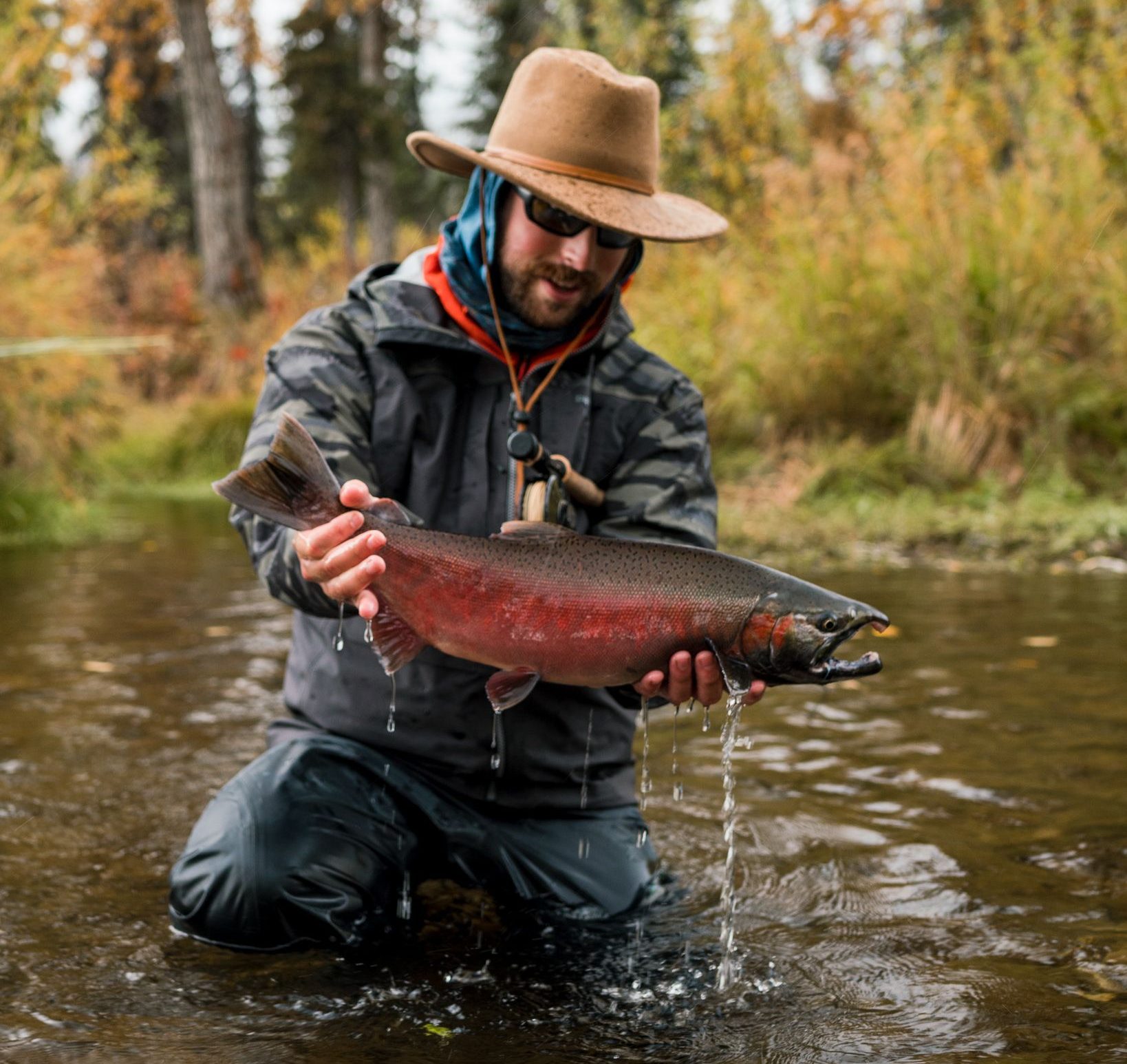 Coho Salmon are some of our favorite salmon to fish for, as they put up a great fight. These salmon are also known as silvers because of their bright silver color (before spawn). Pink streamers, Dalai lamas, and topwater poppers work great for catching silver salmon. 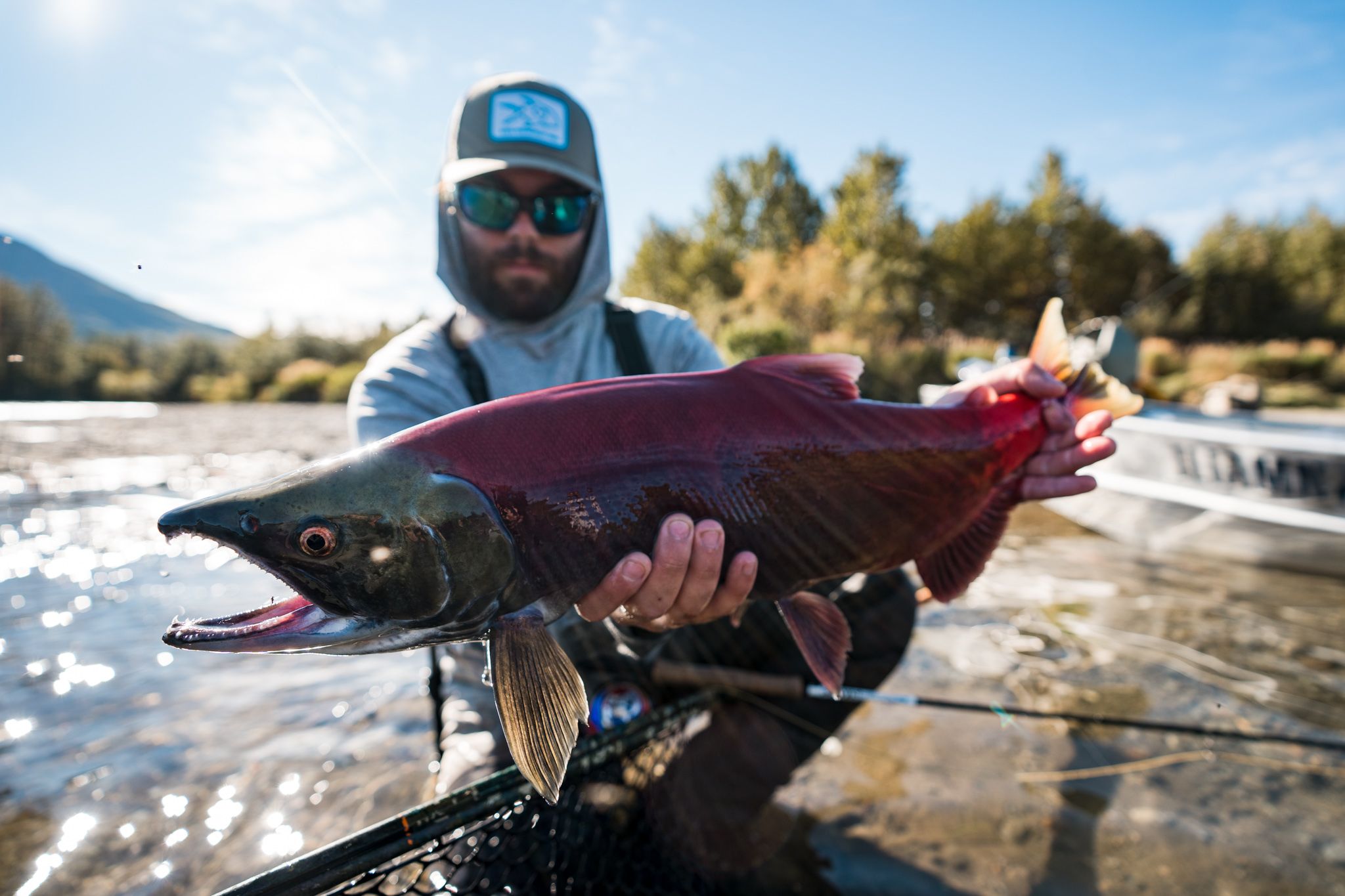 This salmon is known because of its unique Tiger stripes and sharp teeth. Chums are also known as dog salmon because of their canine-like teeth. These big dogs are fun to catch on streamers and put up a decent fight. Fun fact, chum salmon are the most widely distributed salmon in Alaska.

Which Seasons are Best for Alaskan River Fishing? 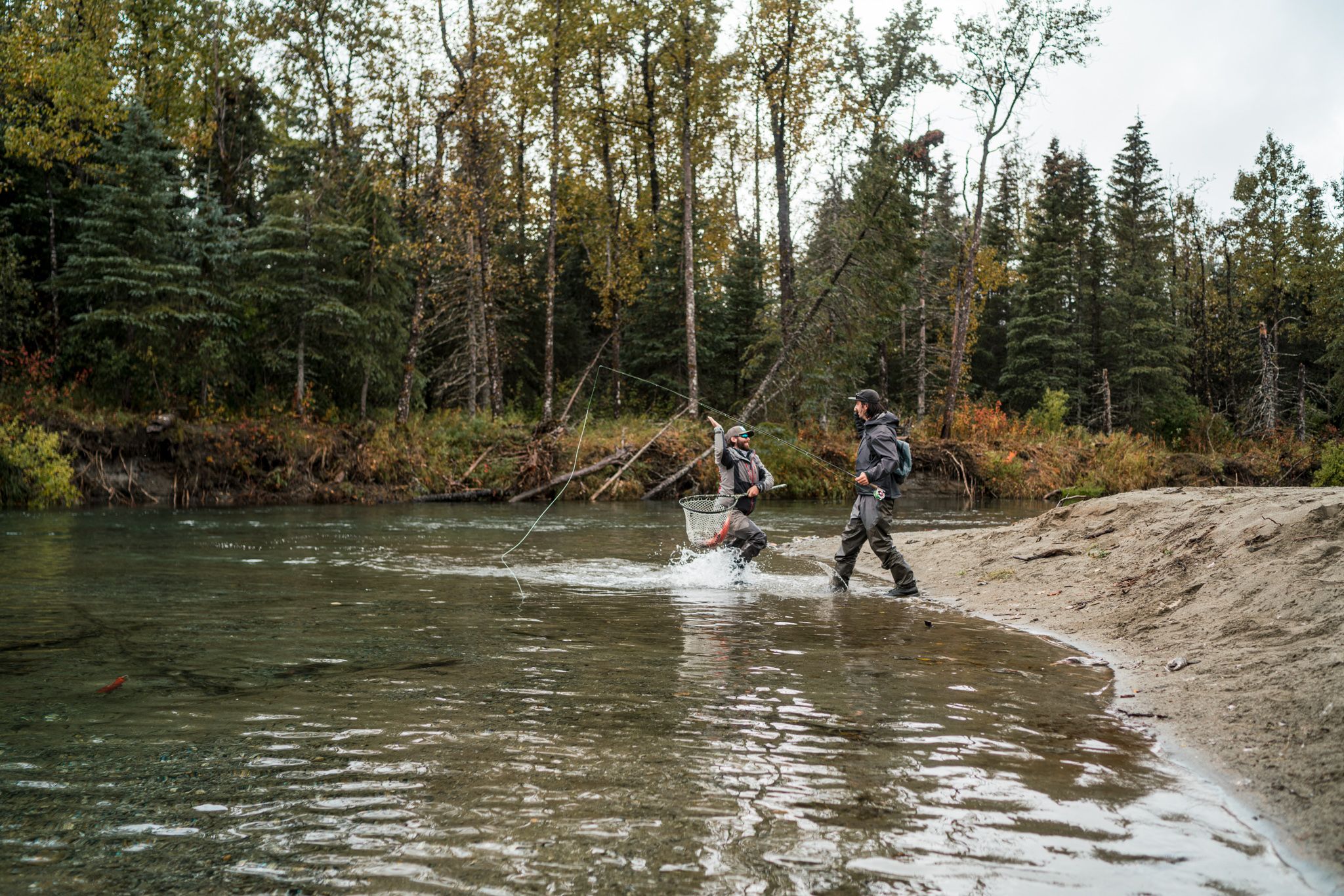 Although spring fishing is a short season in Alaska, it offers some great opportunities for rainbow and char fishing. Fish are hungry after the long winter and ready to eat. Sculpins, nymphs, and leeches do great in the spring for rainbow trout.

The warmest and sunniest time to fish here, summer fishing is hard to beat. In the land of the midnight sun, it seems as though the sun doesn’t set in the middle of summer. This allows for long days of fishing for rainbow trout, grayling, dollies, and salmon. Summertime is one of the most popular times to visit Alaska and the salmon are normally in mid to late July. This beautiful time of year is what dreams are made of.

August and September bring some of the best fishing for Rainbow trout, because they are eating as many salmon eggs and as much flesh as they can. Rainbows are fat as ever during fall here, and fishing for them is electric. Fall also offers some great silver salmon and chum salmon fishing. We highly recommend bringing rain gear for this wet season, but you won’t be disappointed about the insane river fishing fall brings! 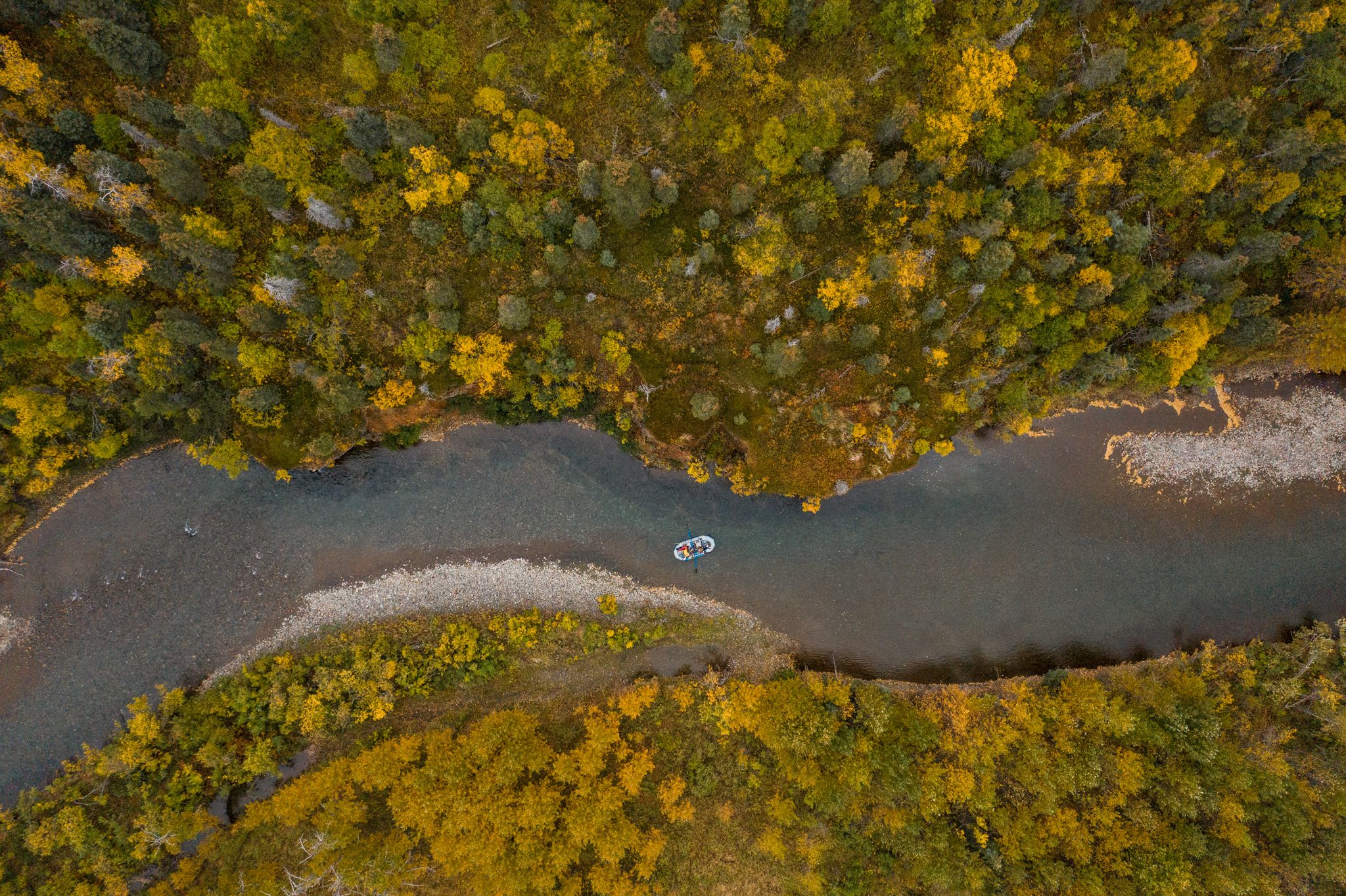 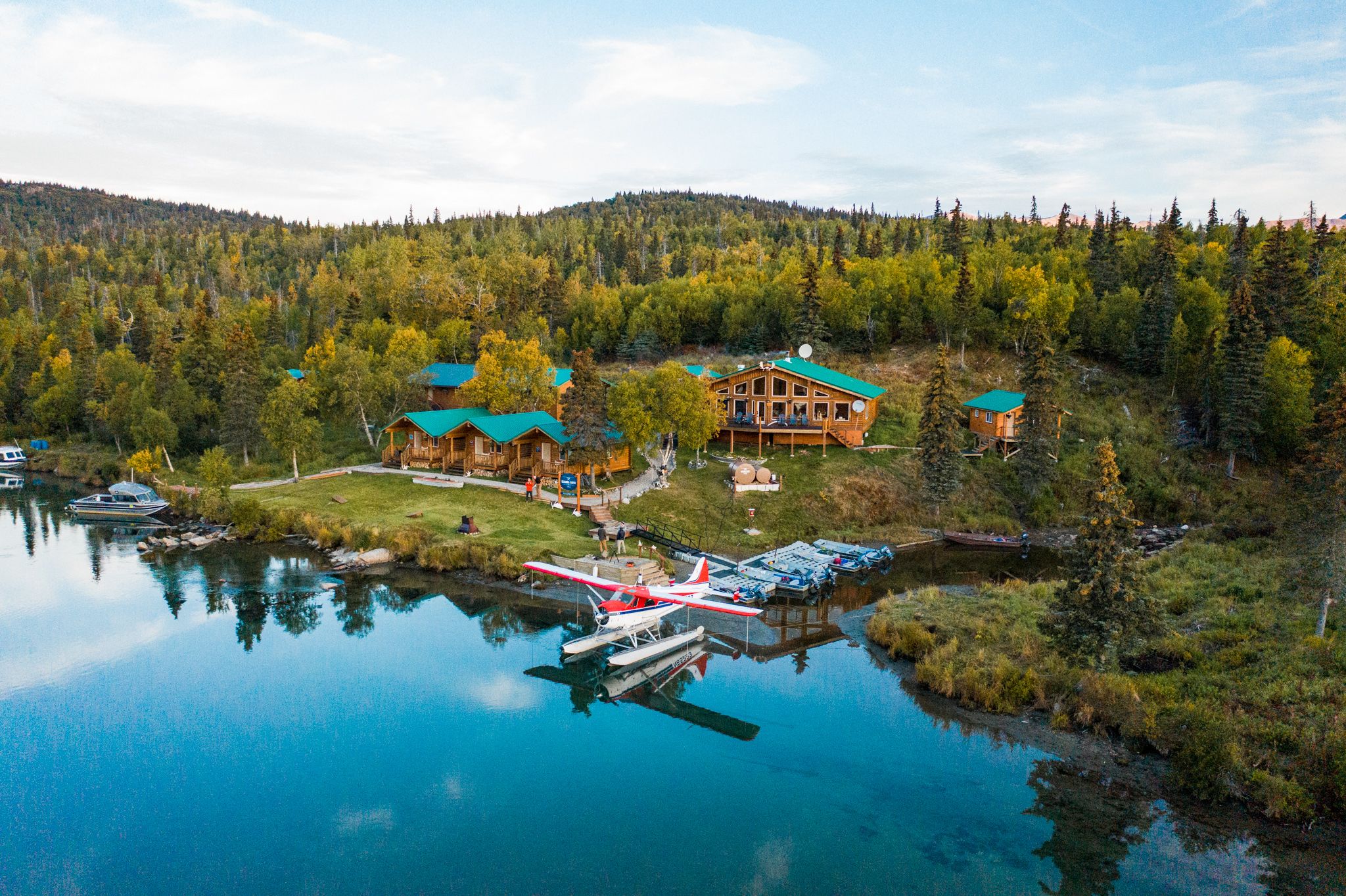 Explore one of the most remote, richly fishable rivers in Alaska with us at Rainbow River Lodge. Filled with Rainbow trout, Salmon, Pike, and Char; the Iliamna is a true angler’s paradise. Come experience true wild, all while in the comfort of your own cabin located directly on the River itself. With World-class dining and highly experienced guides, we guarantee you’ll have an experience that you’ll never forget. Learn More About Planning Your Trip HERE.