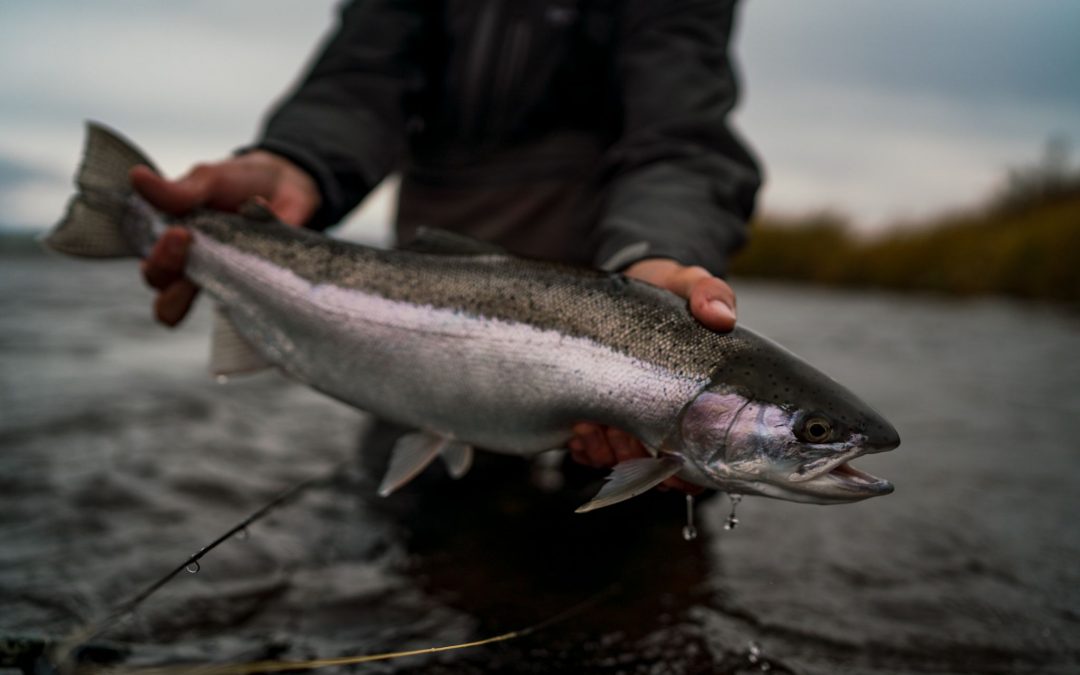 Alaska is primarily known for its prolific Salmon runs, moose, bears, and eagles, but during your stay at Rainbow River Lodge located on the lake Iliamna watershed, you may find something else that titillates your curious side. A predatory leopard-spotted trout that is so aggressive when taking a fly that you may not want to fish for anything else. From their elegance to their sheer wild nature, there is almost nothing more entertaining than Rainbow trout fishing in Alaska. 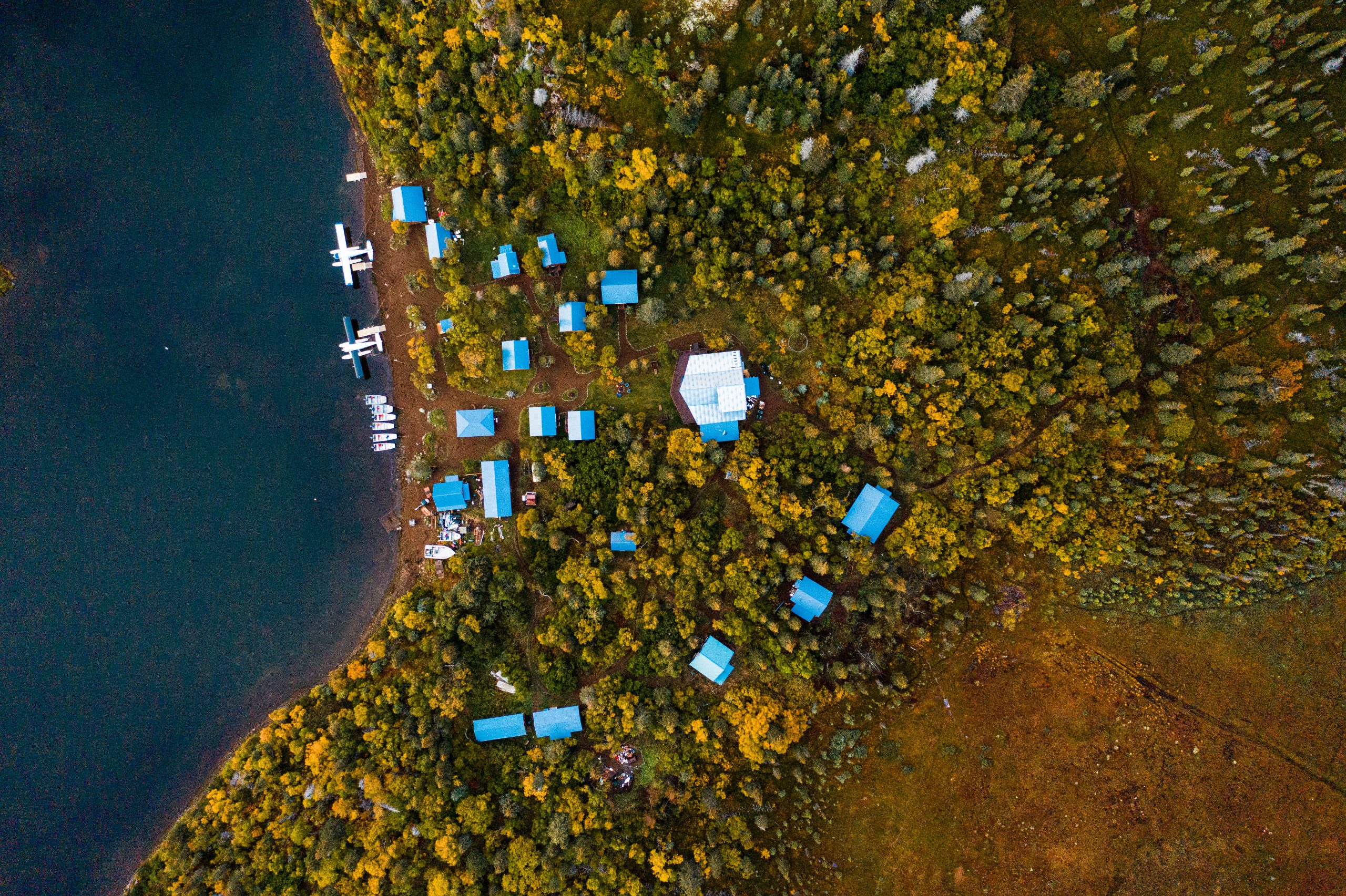 Why the Rainbow Trout Fishing in Alaska is So Good:

Rainbow trout are located throughout the central and southern regions of Alaska and rivers of Bristol Bay are still a major stronghold for these wild trout. The size and number of these fish are almost unparalleled anywhere else in the world. The reason these trout grow to world-class proportions is that Bristol Bay supports massive salmon runs which in turn support the entire Bristol Bay ecosystem. 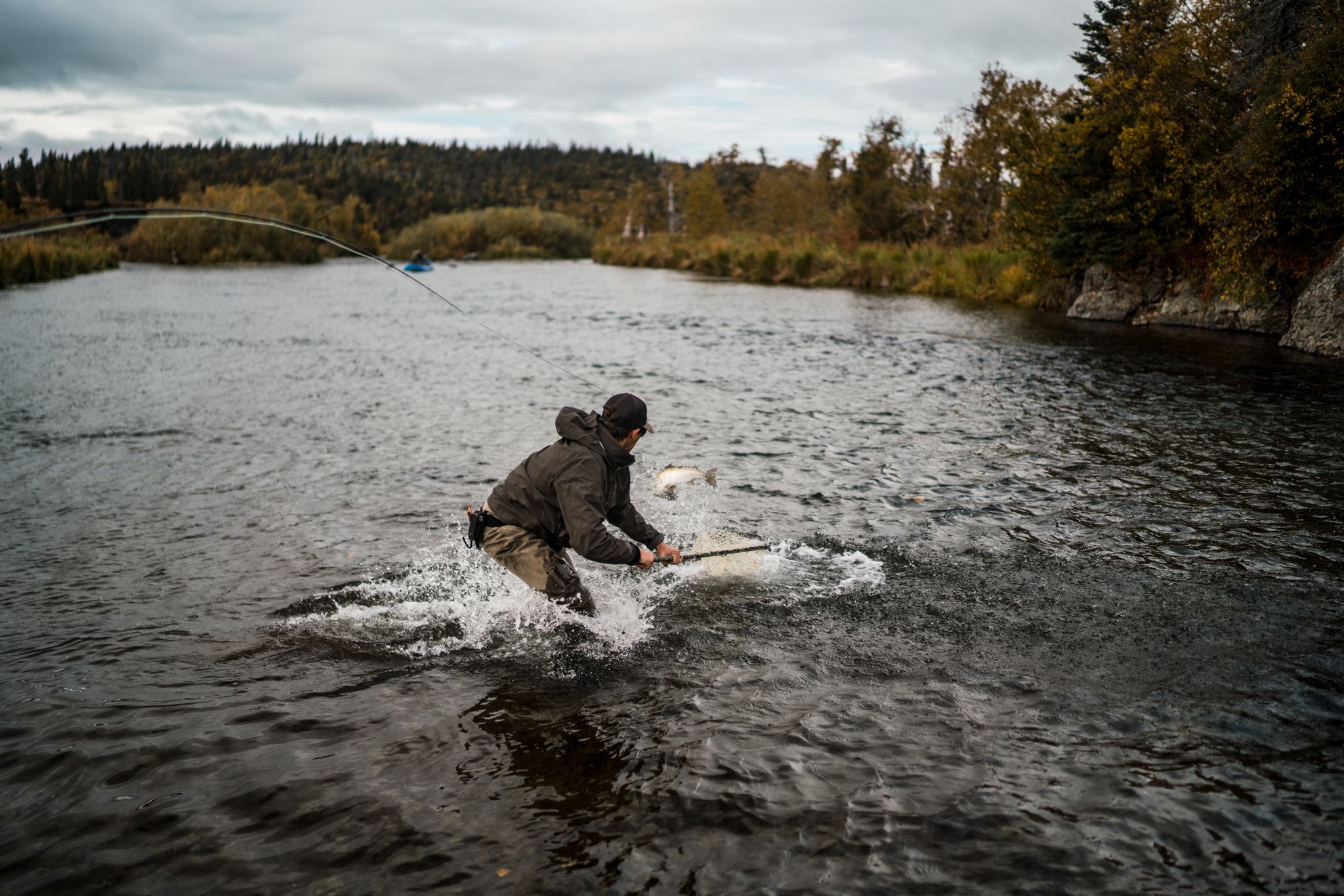 During the springtime rainbow trout can often be found at the mouths of rivers waiting for salmon smolt to migrate out of the rivers and make their way to the ocean. The trout hunt these baby salmon by trapping them up against the surface of the water similar to many ocean fish feeding on bait balls. During this time, it can be a blast to cast poppers into the swirling water and watch as your fly gets annihilated by a hungry trout. Smolt fly patterns are also very popular during this time which can be swung, stripped, or dead drifted. Shortly after the smolt out-migrate, the trout begin to spawn, it is best practice to leave the trout alone during this time so they can successfully spawn without any interference from humans.

When to Fish for Rainbow Trout in Alaska: 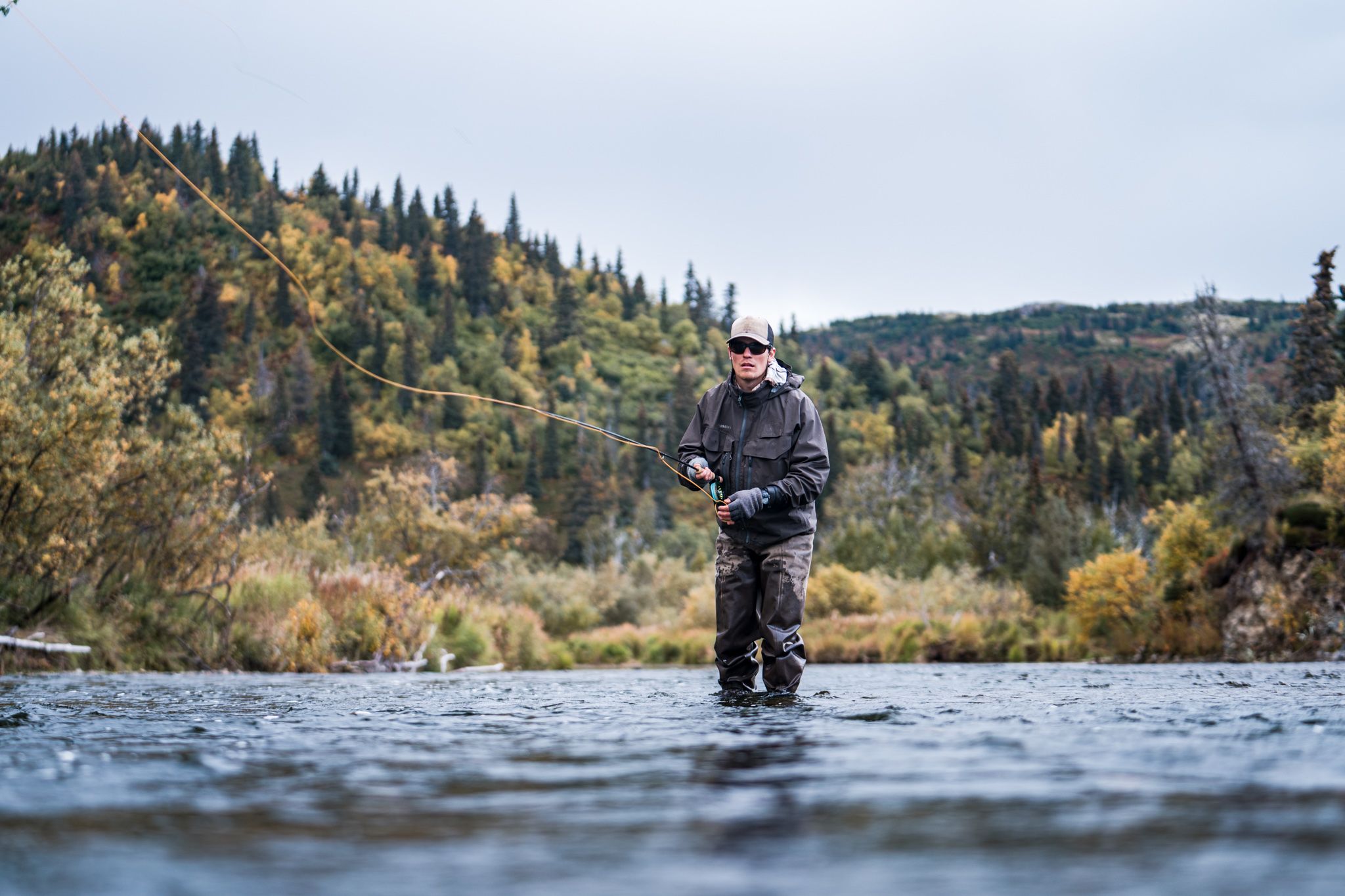 After the trout spawn (around the beginning of summer, i.e. mid-May), the fish begin to position themselves near salmon spawning grounds. During this time the trout can be caught many different ways to include mousing, swinging streamers, nymphing and even casting small dry flies to rising fish. Depending on the river system, king salmon begin to spawn between June and July. During this time, you are still able to catch trout utilizing different tactics but beading or fishing glow bugs becomes the most productive method. A bead or glow bug imitates and salmon egg which the trout heavily rely on for easy sources of protein and calories. Although many people continue to swing flies throughout the summer, beading is by far the most productive method to catch trout from June until September.

Gear for Fishing for Rainbow Trout in Alaska: 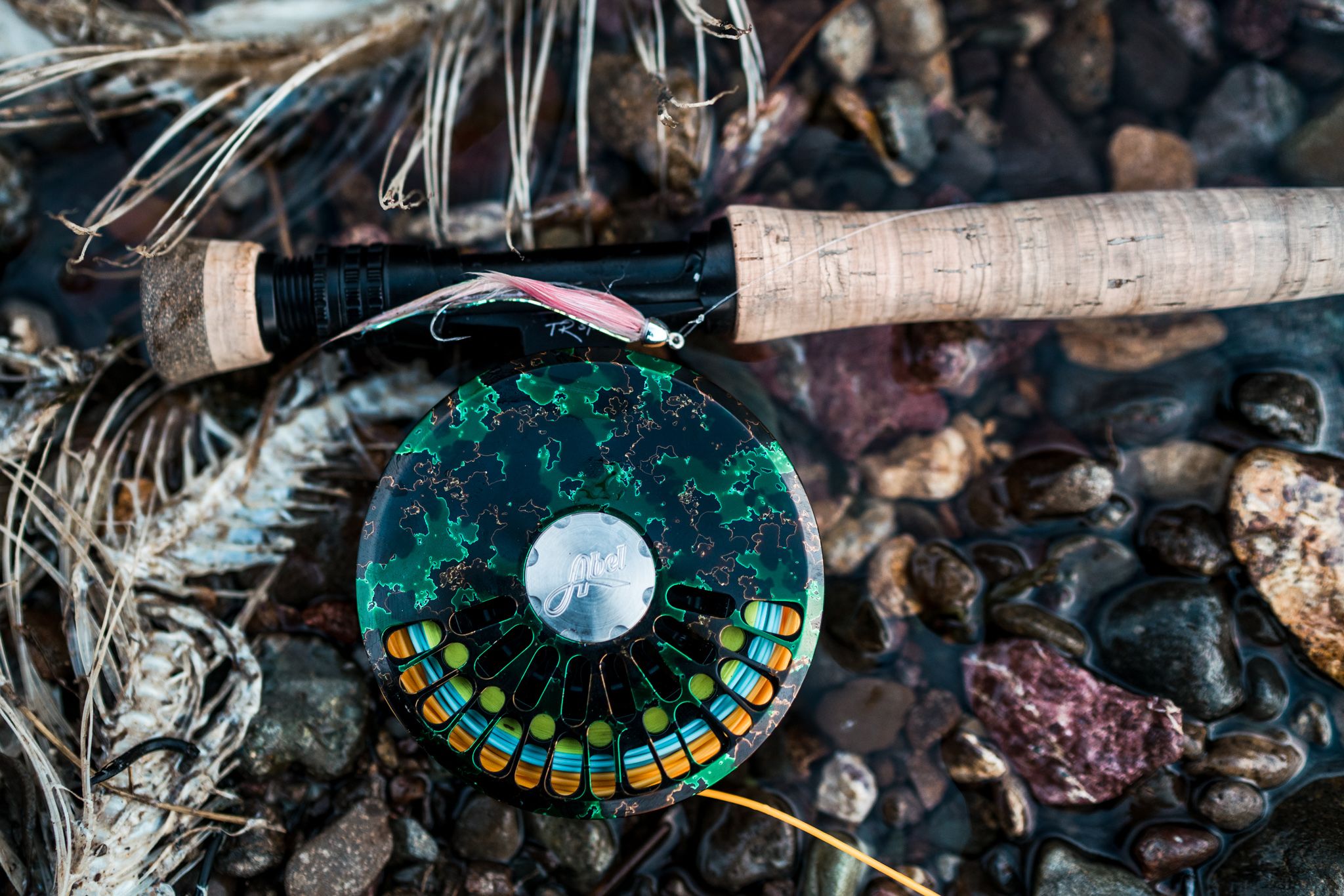 If fishing with us, we have a vast array of equipment to make sure you have everything you could possibly need to catch the Rainbow trout of your dreams. However, if you want to get more technical and bring some of your own equipment, here is what our experts recommend:

Typically a 5-7wt single hand rod or a 4-6wt two-handed fly rod is used for catching rainbow trout in Alaska. A 6wt single hand and 5wt two hander are always safe bets and will give you enough backbone to handle the bigger fish.

Finding a good reel to balance your fly rod is equally important if not more important than the rod itself. When targeting 30+ inch rainbow trout your fly reel is no longer just a line holder and you will want a good smooth drag system to fight the fish. 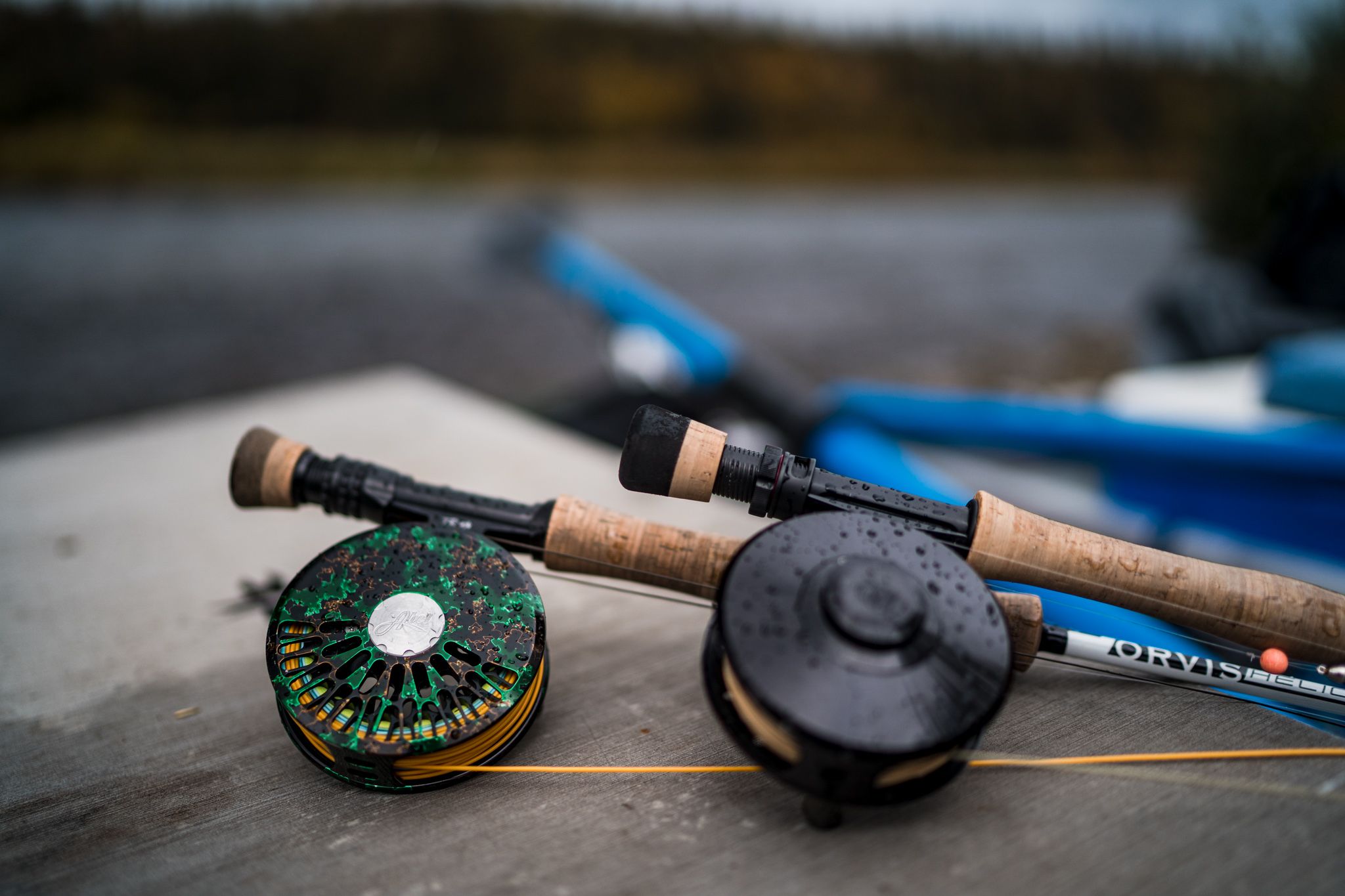 Single hands lines: The line you will need always depends on the type of fishing that you plan to do. A simple weight forward floating line will do the trick in most situations and you can add sink tips as needed when fishing streamers. Spey and switch lines: The utilization of Skagit heads in Alaska is becoming increasingly popular. A short Skagit head can help you cast those big streamers farther and with less effort.  With the introduction of micro Skagit heads, you can even line your single hand fly rod with a Skagit head and appropriate sink tip for fishing streamers and even mice! It is a very fun and highly effective way to fish Alaskan waters.

You will find the Dolly Llama bunny fly in just about every anglers fly box here. It is a pattern that is simple to tie and is highly effective almost year round. If swinging big flies is your game, a dolly llama is a must. Also, there are a plethora of leech, sculpin, smolt patterns that have been tested and proven to be worth their weight in gold in Alaskan trout waters. If mousing is your game, the Mr. Hankey, Moorish and Pipsqueak are all good choices. As always, don’t forget your bead box. When the salmon are dropping eggs, it is hard to catch them any other way but don’t be fooled, beading has become a science in Alaska and if you do not have quite the right bead color, you won’t catch jack! 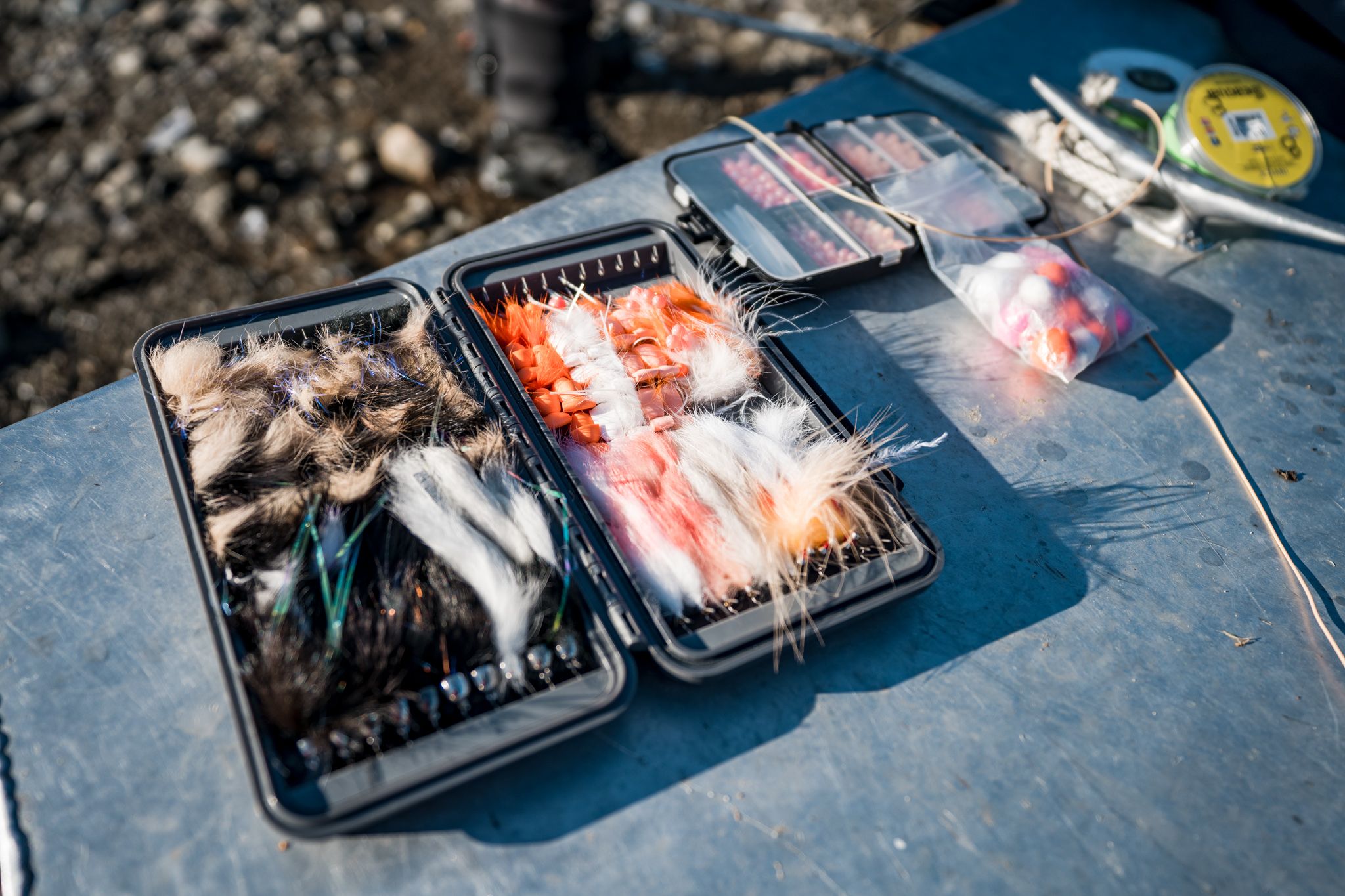 Tactics for fishing for Rainbow Trout in Alaska:

You can target rainbow trout in Alaska any way you like. Technical nymphing and dry fly fishing can be very effective during the spring and Alaska has rather large caddis, stonefly, and beatis hatches. Streamer fishing is a highly effective way to trout fish in Alaska and the use of a trout Spey or switch rod can give you a leg up on your buddies when fishing streamers. Mousing is also an extremely popular and exhilarating way to fish for big predatory rainbow trout. Of course, beading works too and sometimes is it tough to catch trout any other way during the egg drop.

How to fish/how to fight: 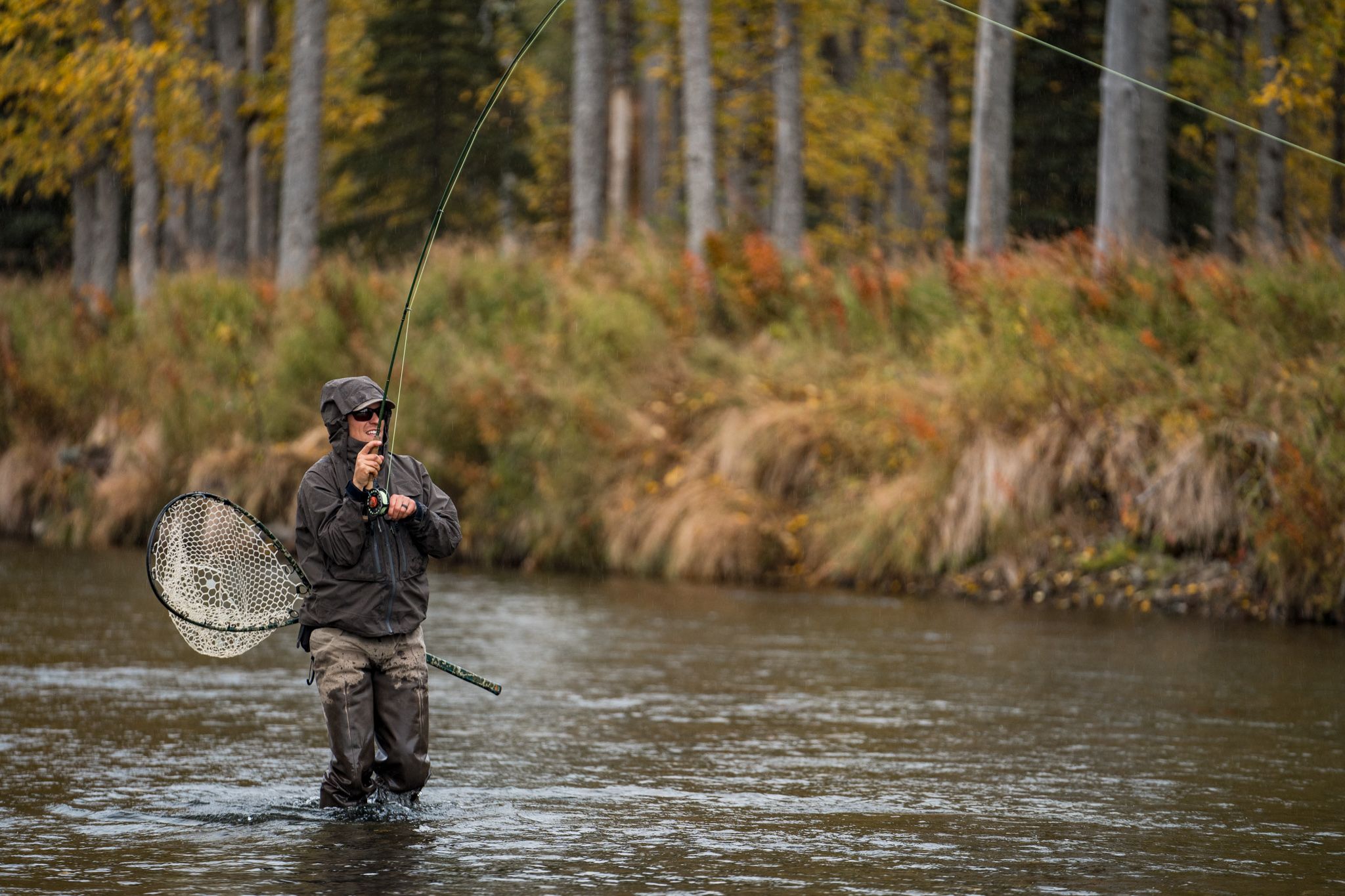 You will want to target the outlets of lakes during the early spring. The trout will wait there to ambush out-migrating smolt. During the later spring months and coming into summer, the trout will begin to position themselves near good salmon spawning areas. You will want to target log jams, cut banks, seams, and pocket water. The trout will lay in these easy-to-hide spots to ambush their quarry. When the anadromous fish begin to make their way upstream to spawn, the trout switch gears and begin to go after the easy calorie-dense salmon eggs. Salmon eggs are easy to scoop up and this is when beading is by far the most effective method of catching trout in Alaska. While the salmon are actively spawning, the trout will lay a few feet behind their redds waiting for eggs to come bouncing downstream. If you have the correct size and color bead this is when you can catch a lot of fish in a very short amount of time. While the salmon are beginning to dig redds and prepare to do their dance of love, try fishing the riffle sections below the spawning grounds. The trout find safety in the riffles as eagles, bears and other predators have a hard time spotting them while they wait for eggs to drop. After you make that long picture perfect cast to a small pocket pushed up against the bank holding a 30+ inch rainbow trout, the last thing you want to do is lose it during the fight! After the fish makes its initial first couple of runs, remember to do your best to keep the fish off balance by lowering the tip of your fly rod to your downstream side and pull toward the bank. This will keep the fish off balance and it will have to expend a lot of extra energy trying to position itself in a place that they effectively fight. 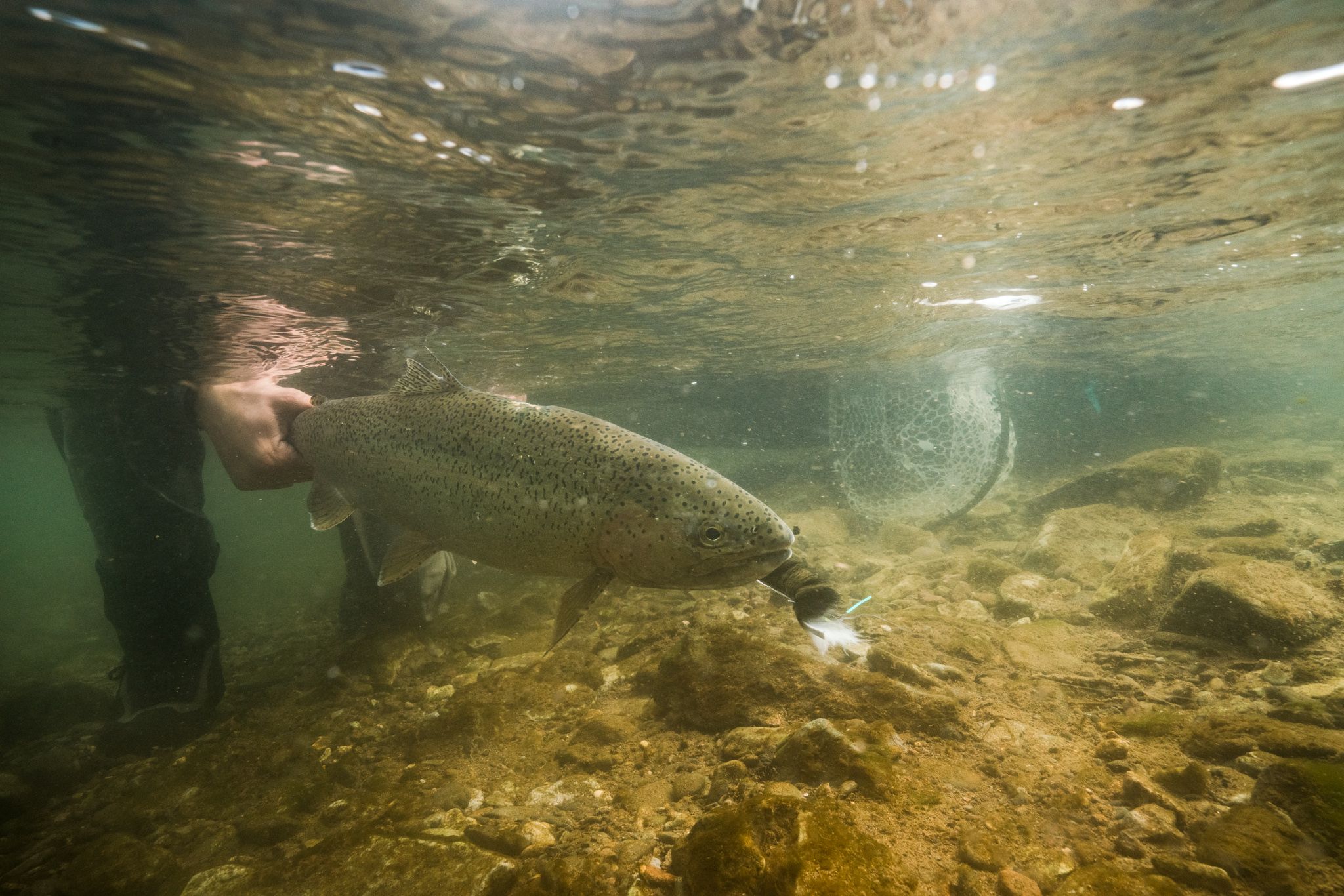 There are general rules which can enable the longevity of the trout fisheries throughout Alaska. Remember to practice proper fishing handling, limit the fight times and never walk through spawning grounds of fish. ALWAYS wet your hands before touching any fish. This helps the fish retain its protective slime layer which defends the fish from harmful bacteria and NEVER use a tailing glove. Use a rubber landing net, this will allow for shorter fight times, help avoid fish being drug up onto the rocky bank of a river where they can bonk their head, and assist with letting the fish rest before release. It also reduces handling time and which will also protect the fish’s slime layer. When releasing fish, always find a spot with a soft current and point the fish’s head upstream. This will allow water to pass over the gills and allow the fish to breathe and recover before being returned to the harsh Alaskan waters. Do not underline your fish. Alaskan rainbow trout are not line shy. You can often get away with fishing 10-12lb test tippet and catch plenty of fish to keep yourself entertained all day. Fishing a light tippet can lead to prolonged fight times and over-stressing fish which can result in the death of that fish! In order to protect the fisheries and trout we love, use an appropriate tippet class for the fish you are targeting. It seems as though each week in Alaska brings on new and exciting challenges. One week, you may be casting small delicate dry flies to rising fish and the next, the fish have fully transitioned into eating salmon eggs. Do your best to stop and watch what is happening on the river while you are there. This will help you determine how you should be fishing.

How to Book a Trip to Fish for Rainbow Trout in Alaska: 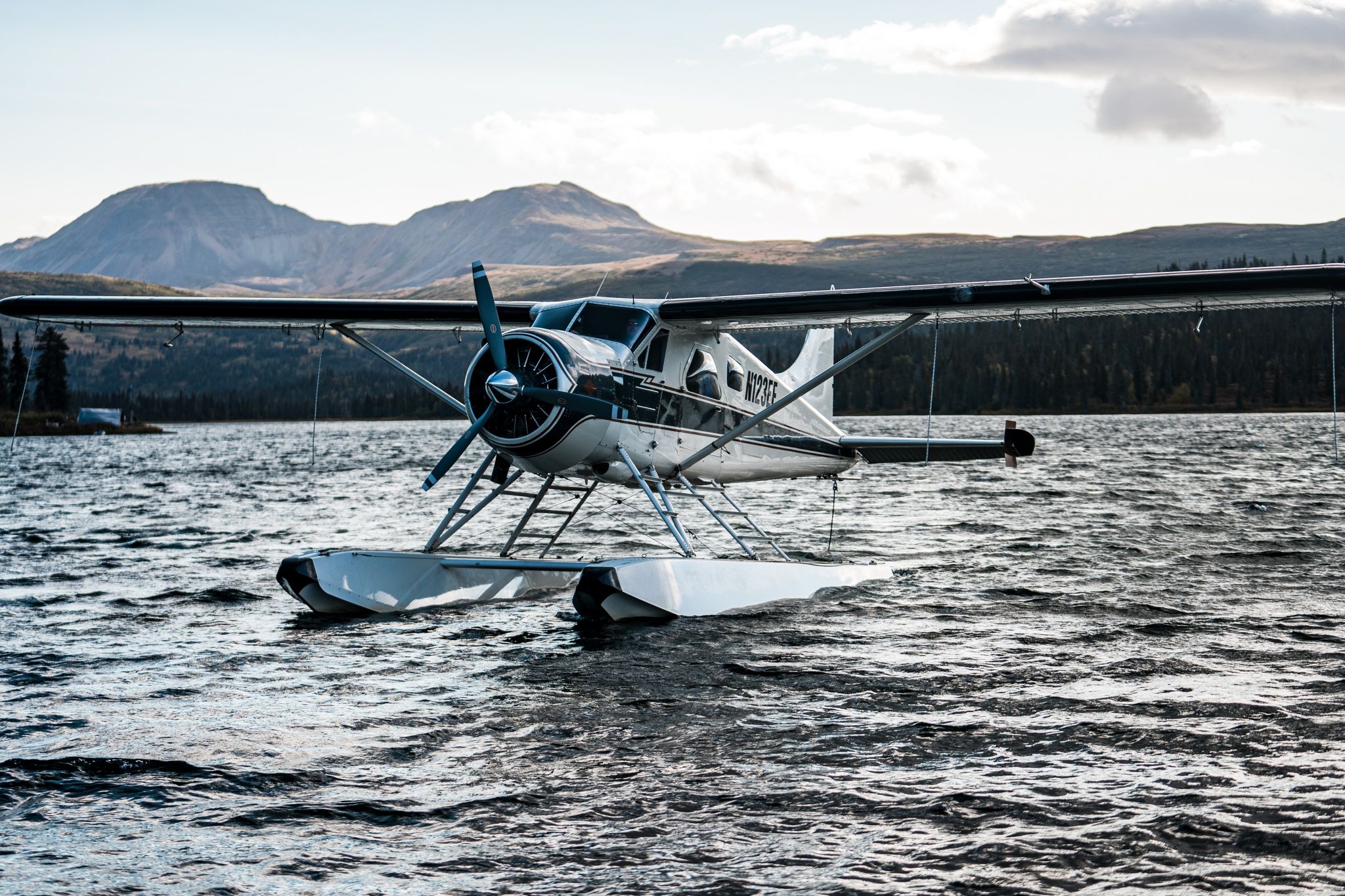 Adventure and the fish of your dreams await! Come join us at Rainbow River Lodge for a week of unparalleled fishing, gourmet food, and top-of-the-line hospitality – all while enjoying the scenic views of one of the wildest places on earth.

CLICK HERE to learn how easy it can be to book a once-in-a-lifetime fishing trip, here at Rainbow River Lodge.